“Rituals of the contemporary” is a residential module conceived for Cittadellarte – Fondazione Pistoletto and Fondazione Zegna by Fiamma Montezemolo and developed under the umbrella of UNIDEE (curated by Valerio Del Baglivo and directed by Juan E. Sandoval, within the general direction of Cittadellarte’s director Paolo Naldini).

This residency module is supported by Fondazione Zegna and will take place between Cittadellarte – Fondazione Pistoletto in Biella and Fondazione Zegna in Trivero (BI), Italy. It amis to reflect on the notion of the ritual, its current meaning and practice. In the last years many disciplines (religion studies, anthropology, philosophy, art, socio-biology) have approached the ritualistic and its role in making ‘visible’ a certain order in a specific context, in showing ‘the proven way of doing something’ which is the etymology of the word. As Catherine Bell says, ritualization is “a way of acting that is designed and orchestrated to distinguish and privilege what is being done in comparison to other, usually more quotidian, activities”.
The ritual involves, in general, a series of choreographed practices based on images, words, activities, objects, symbols that are organized in a performative act. The ritualistic act requires whomever is involved to cross 3 phases: separation / threshold / aggregation (V. Turner). The initiated is pushed to ‘plunge’ in a sort of liminal phase in which he/she is immersed in an anti-structure/chaos (changing clothes, food, hallucination, dwelling in unusual spaces, loss of usual cultural references, etc.) for a definite period of time and in a specific space in order to re-emerge to a renewed status and way to influence the cosmos.
The participants will be invited to reflect on the ritual and envision their own performative act. They will do so by recreating a ‘rite of passage’, or ‘seasonal rite’, or ‘life event rite’, or ‘rite of exchange’ of their own choosing, through an investigation of the ritual in art, focusing the module on contemporary socio-cultural rites in the territory of Trivero and Oasi Zegna. In classic anthropology, the main understanding of the ritual is that the ‘liminal phase’ brings ultimately to an act of reintegration in a certain societal group. In contrast, our main question will be: could an art work make the liminal a more permanent condition and bring us to a new order instead of a preestablished one? We will work on the association of performance and ritual stressing their processual, indefinite dimension, and transformative possibilities, thus making the threshold of the liminal the main source of our creative acts.

Here my video-installation produced during the residency: 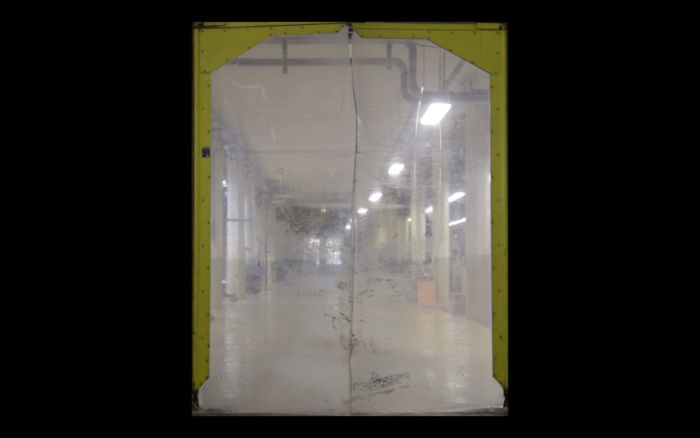 “To Exit Is To Enter To Enter is To Exit” is a video-installation that recreates in 1:1 scale the door that separates different sections of the Ermenegildo Zegna factory in Trivero, Italy. This door – which becomes a threshold – is made from a plastic, semi-transparent material and makes visible what happens both inside and outside. The video, which consists of a loop of a fragment of life inside the factory, took inspiration from the movie directed and produced by Louis Lumière titled Workers Leaving the Lumiere Factory (1895) and is often referred to as the first real motion picture ever made. It shows how the ritual connected to factories has changed from Fordist (embodied by the Lumière epoch) to post-Fordist society. This still shot is projected on the door, creating a trompe l’oeil effect. In this way, the audience has the illusion of entering the factory but ends up entering an art space. The art workers become workers, or vice versa.